A year to remember or one to forget?

The impact of the coronavirus has changed the business environment globally – perhaps even more so in South Africa, with our country having implemented some of the strictest lockdown regulations in the world.

Statistics South Africa's second impact survey, which was a business response from mid to late April, indicated that, just a few weeks into the lockdown, a third of firms had started laying off staff, while 25% had decreased working hours. Sadly, 10% of businesses had also permanently ceased operations by the time I wrote this article. Sectors most affected by business closures were construction (14%), community, social and personal services (12%), and agriculture, hunting, forestry and fishing (12%).

When the lockdown was imposed, more than half of businesses indicated that they could not survive without turnover for one to three months. The restaurant industry, in particular, was on the brink of collapse. Escalating unemployment became another harsh reality, with an estimated four million additional job losses.

Unfortunately, by the time you read this issue of Oilseeds Focus, these statistics will be outdated and the devastating effect of the lockdown on our economy may be even greater.

The agricultural industry, which was classified as an essential service, can be incredibly grateful that it was able to operate. Here, government must be commended for its assistance in allowing and enabling the sector to continue, with minor exceptions.

Despite many challenges, a maize crop of 15,22 million tons is expected this season. This is exceptional given the ten-year average of 11,97 million tons and is second only to 2017, when a crop of 16,82 million tons was reported.

The soya bean crop is expected at 1,29 million tons. The ten-year average is 949 616 tons, and this season's crop is only surpassed in size by the 2017 and 2018 seasons. The Free State has shown encouraging growth of 37% in production and is the largest production region of soya beans this season. With carryover stock, this crop should allow for processing of 1,45 million tons in 2020/21, thus continuously increasing South Africa's strides toward self-sufficiency in soybean meal.

The sunflower crop, which is expected to be around 731 210 tons, is also encouraging, while groundnuts have made a remarkable recovery from the crop failure of last year, which produced less than 20 000 tons. In comparison, this season's crop of 62 470 tons should bring great relief to the industry.

The impact of the coronavirus will be felt for a long time. Since the lockdown began, Business Unity South Africa has suggested that instead of begrudgingly opening the economy with a long list of prescribed goods, government should supply a short list of exclusions. Only time will tell what will happen. For the sake of all South Africans, let us hope that logic prevails.

Enjoy this edition of Oilseeds Focus. 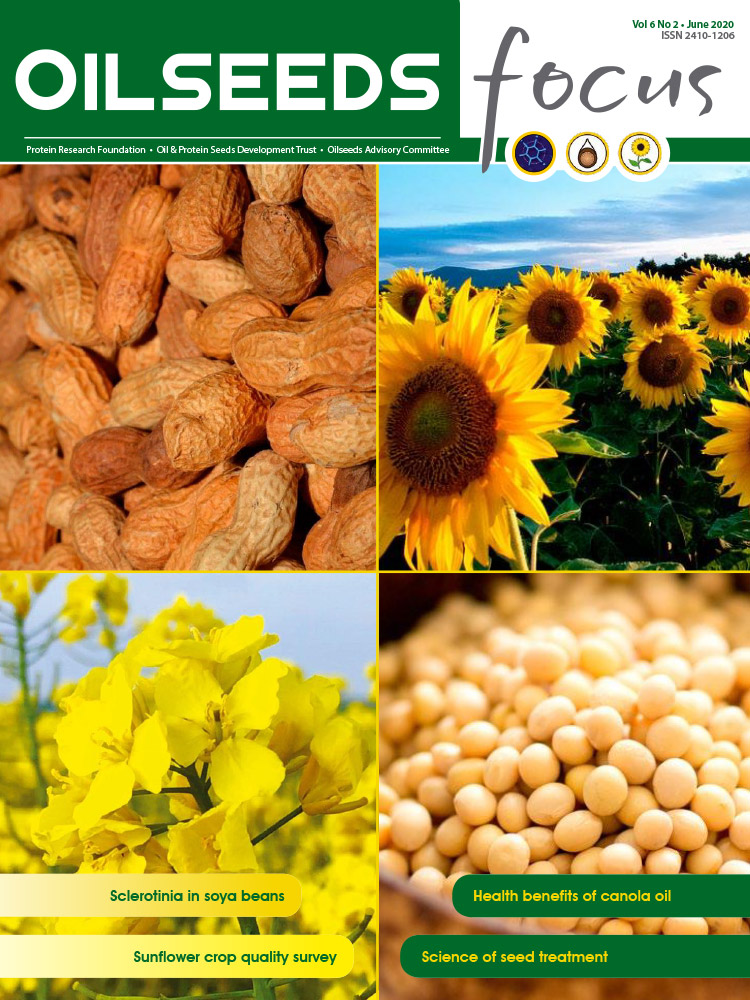